I haven't posted in a while due mainly to the fact Julia has been doing so well health wize. We FINALLY got the ringworm fungus cleared up. She has started the orthodontist visits. She gets her appliance to widen her upper jaw on Dec 23rd. The doctor is placing two barbs on the end of it to stop Julia from her thumb sucking habit (one she had BEFORE she was born....we have ultrasound pics). I am hoping it doesn't mess up her tounge too much. That is all we need is for her to not eat due to her mouth hurting.
She is still taking her allergy meds and the Zithromax and Vemma as well. Those last two really do make a difference as when she doesn't take it after about 3 days she starts having breathing problems or comes down with a cold.
I heard reports for other parents at her school that 2 kids have scarlet fever and that there are 5 cases of RSV in the 4yr old program. OH MY!
Julia is still doing well with her mid morning snack. She eats "brunch" with the school secertary each morning. Julia says she is her "BBFF" meaning best brunch friend forever. She is such a hoot!
She is excited about Christmas. She plays an elf in her class's play. From Santa she wants Pixos and from us she wants a Tinkerbell doll and Incredible Hulk boxing gloves. What a combination!
Hope everyone has a safe, happy, and healthy holiday season.
Jenn
to learn more about Children's Interstitial Lung Disease please visit www.childfoundation.us
Posted by rare lung mom at 3:25 PM 43 comments:

NEHI: A Rare Diagnosis after Misdiagnosis

Below is a link to an article a friend of mine (whose son has the same lung disease as Julia) wrote. It is quite informative. 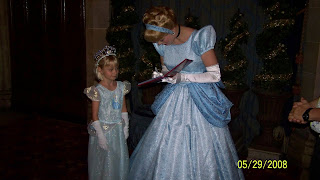 This school year got off to a rocky start as you could read in previous posts. The latest has been ring worms...lovely. We also had some strange blister looking marks on her. I thought they were bug bites even though she has never had anything like them before. After much research on the internet and talk with my school's nurse (doctor's office was closed). We concluded Julia MAY have had chicken pox. Yes she had the vaccine but that is not always 100% effective expecially in children with other issues like Julia. As I said I thought they were bug bites because there were so few of them, but even after staying indoors she had new ones coming up. So we are pretty sure that is what it was.
At Julia's teacher's request we have added a mid-morning snack. She has been doing much better eating every 3 hrs or so. She has breakfast at 7am, then snack at 10am. Lunch is at 12 and after school snack is at 3:30. Dinner is at 6pm and night time snack is at 8:30pm. She is maintaining her weight(even gained a pound), and has grown in height. So that is all good.
We did have to double her glasses strength this year. I am hoping this will not be a yearly occurance. Her sight in her left eye is pretty bad close up. No wonder the poor kid hated reading. Now that we have new glasses she is reading above her grade level rather than below. I did speak with the teacher about how much they read out loud in class. She said Julia doesn't seem to want to read as long as she things she is capable of. Uh lady....it takes a lot of air to read out loud for long periods of time. Once she remembered that she has let up on Julia.
Julia is looking forward to Halloween. She still hasn't made up her mind on her costume. She is either going as Cinderella again or going as a Lion.
Posted by rare lung mom at 6:00 AM No comments: 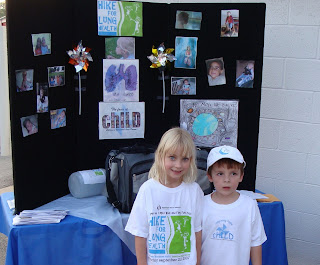 Julia did an amazing job with the help from friends, family, and even people we have never even met. She was able to raise over $2,000. The Children's Interstitial Lung Disease Foundation came in 3rd place with over all funds raised. This is great news.
We are so lucky to have people care about Julia the way they do. God Bless each of you.
Grant Hall from Norman who also has chILD, was able to make it to the Hike here in our hometown. Although we were unable to attend in Chicago, the same spirit was envoked. We want to help find a cause for this disease and a cure. Thank you all for the help!
Posted by rare lung mom at 5:47 AM No comments:

Well I think we set a record for how many days we can go without
missing school. Only not the kind you would hope for. Julia made
it the first full day. BUT....apparently she fell back in her chair
and hit a desk that is behind her. She did not tell the teacher nor
did she go to the nurse. Yet at around 5pm on Monday she keeps
telling me her back hurts bad, her head hurts, her chest hurts. Ok
I am thinking she just doesn't want to go to school the next day. I
massage her back, put a hot pad on it, give her Moltrin, and she
still complained, I give her a hot stone massage (spoiled child yes
I know). She even asked me to take her to the doctor untill I
explained that after dinner time it would mean going to the
hospital. She wanted none of that. All the while I am asking her
all kinds of questions, did she fall?, did she get hit? She makes
up this very elaborate story about how one of the new girls got mad
at her for getting to see Cinderella and hit her in the back causing
her to fall back into the desk and hurt her back. HMM???? I asked
if she told the teacher, if the other girl got in trouble, if she
say the nurse....No, no and no. So I am thinking this is one fishy
story. I see no bruises or obvious signs of trauma. This child
doesn't want to go to school. I finally get her on to sleep ....in
our bed. She tosses and turns all night, breathing fast and heavy
despite her oxygen, and talks in her sleep. Yesterday morning comes
and she has a headache, stomach ache, and her back hurts really
bad. Again I am thinking she doesn't want to go to school. She has
no fever and again no signs of problems on the back. I talk her
into going on and let her bring her oxygen....more of a "safety
blanket" kind of thing. Well by 8:30 am her teacher is calling me
saying Julia is acting really sick saying her head hurts, her back
hurts and her stomach is hurting. She told me "I am all new to this
medical issue thing". Sigh! I send my mom to go get Julia. At
lunch I go check on her. Mom said she had a low grade fever and had
given her Moltrin and that Julia was sleeping with her oxygen on and
had been sleeping since 9 am. So at 1pm I call the doctor and take
her in. He can't find anything wrong with her back, despite her
telling him it hurt bad...."a 12 on 1 to 10 momma". He does however
say she has nice green snot in her sinuses. Lovely!
We leave with orders to start zithromax, mucinex, singular, flonase,
periactin, and lots of water. Still complaining of the back. So I
call my chiropractor who tells me to just bring her on in. He
examines her first as he says he didn't want to do an x-ray if it
wasn't necessary on a young kid. He feels along her back with her
saying ouch all the way. Finally he has her lay down on her tummy,
and again massages and pokes and prodes. Then POP! He popped her
back and she says "AWWWW that was it!". She was fine after that.
He said she had popped a rib up over the other one. WHAT!!!??? OMG
I felt horrible as I have done that and man oh man does that hurt.
I could hardly breath when it happened to me. Which would explain
the 89% o2 stat she had in the doctor's office. She was fine this
morning and was eager to go to class.
So this school year is off to a wonderful start. HA HA HA
Jenn
Posted by rare lung mom at 3:56 PM 4 comments:

shopping with a lung disease...yuck

So I take Julia to shop for "back to school" clothes. Not a favorite of either one of us. Shopping is just not our thing. We left home at 9am. Drove 2hrs. Picked out 3 new outfits, tried on about 6 pairs of capri pants.......so frustrating having a child who is so skinny that the clothes that actually fit are not age appropriate. Sigh!
By noon we were hungry. After lunch Julia just became so tired out. I felt bad because I had thought of bringing the oxygen but decided against it. She has been doing so well this summer and well it is a pain in the arse to haul around, even though we have one of the battery portable oxygen concentrators (Inogen One ...it rocks!)
Poor kid slept the entire 2hrs home, ate very little for dinner and went to her room. She put her oxygen on herself and is watching a movie.
After all of this .....we still have to find some new shoes for P.E. class....crocs are great but not all the time.
Posted by rare lung mom at 6:35 PM 1 comment:

It is official, Julia will be doing her Hike for Lung Health at 6pm on Friday, September 26, 2008. This is Sulphur High School's football homecoming game. We hope all of you can join us in Julia's quest to increase awareness of this rare lung disease. I have spoken with 5 other families whose children have varying severity of the same lung disease Julia has. They may possibly be joining us that night for the 1mile walk around the track. For more information feel free to contact me via e-mail or phone 405 615 8154. If you would love to help me out with this fund raising ordeal PLEASE call me. Julia and I are great at showing up to tell her story, smile and looking pretty, but organizing something of this nature takes talent and help. To learn more about the Hike for Lung Health go to
Hike For Lung Health

Jennifer Goodnight-Roberso(Mom to Julia age 7yrs with chILDren's Interstitial Lung Disease0
Posted by rare lung mom at 7:38 AM No comments:

rare lung mom
I am mom to a 7yr old daughter who sufferes from the rare lung disorder named Children's Interstitital Lung Disease.

Julia blowing dandelions in the yard Being an oxygen princess is hard work